TRENDS AND MAIN EVENTS IN THE COCOA MARKET January 2023

Upon results of 2022, the prices at the London Cocoa Exchange increased by approximately 15% , at the New York Exchange −  approximately by 4% , the difference is caused by the fact that the British Pound Sterling has devaluated by 10% in 2022 year compared to US dollar.

However, Nigeria and Ghana demonstrate less results compared to the last year, with Nigeria producing 20% less as of the beginning of December. Mainly due to weather conditions.

There are no official numbers for Ghana, but there is a significant deficit: due to the local currency devaluation, most of the harvest is transported to Côte d’Ivoire, where farmers receive up to 20-30% more for their product.

GEPEX or the main processors of cocoa beans into cocoa products in Côte d’Ivoire increased their production scopes by 5% on a year-to-year basis. Total year-on-year cocoa products export increased by 10.5%.

Other news from Ghana is rather disconcerting: Ghana stopped paying its external debts from December 19, 2022; the share of external loans received from the European Union comprises about 40%.

The news appeared just 5 days after the IMF gave a $3 billion loan to Ghana.

This step may be related to the previous legislative proposal of the European Union envisaging a ban on agricultural products originating from the countries that do not take measures against deforestration. We remind to have earlier raised the topic about Ghana encouraging logging for further planting cocoa trees, rubber trees, as well as illegal mining of rare earth metals. The law has not taken effect yet.

Fundamental and technical analysis clearly state that the market is too outbid; as forecasted in the previous report we demonstrated the increasing quotes at the New York Exchange reaching almost 2,700 US dollars price per ton, however, the increase occurred without whatsoever correction.

Due to the weakness of GBP we saw unprecedented prices at the London Exchange that reached 2,150 GB pounds per ton in the mid December.

Currently the New York Exchange demonstrates an upward spike as well as indistinct waves picture composed of 5 waves which, as we believe, shaped the first long increase wave that is to be seen during the upcoming trading.

The upward spike pattern may end in the coming days accompanied by the prices correction; most probably the prices correction will be implemented in 5 waves and may last for 6 – 10 weeks, it is difficult to predict how strong it is going to be; however, the market may well lose up to 10% of its value.

If this scenario is implemented, we will witness a further prices increase on the NY Exchange reaching $3,000 per ton and more. 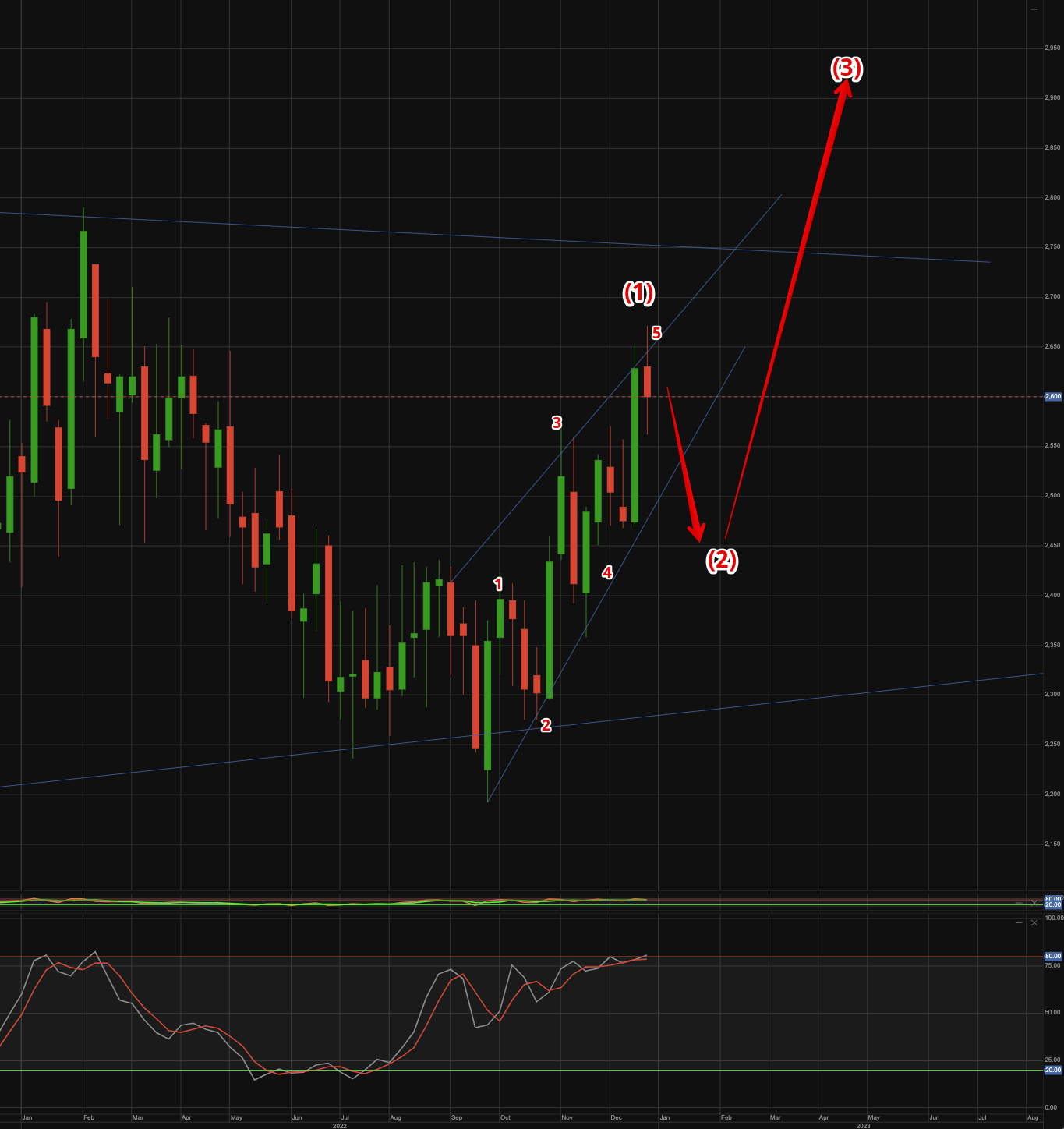 Weather conditions in West Africa almost did not change, below please see two maps: for 90 days and for 30 days with deviations from standard conditions. Quantity of precipitations demonstrates that rainfalls in the autumn period were missing in the most regions that grow cocoa in Ghana and Nigeria.

This year the harvest is rather strongly affected by Harmattan (northern wind from the desert), for the moment the percentage of harvest damaged by this weather pattern has reached peak numbers in the last 8 years.

Besides, La Nina still affects the region which is supposed to ensure favorable weather for cocoa growth in the future. However, there is a risk of El Nino weather pattern in the summer starting from July which may cause a dry period in West Africa and consequently a poor harvest of cocoa beans. 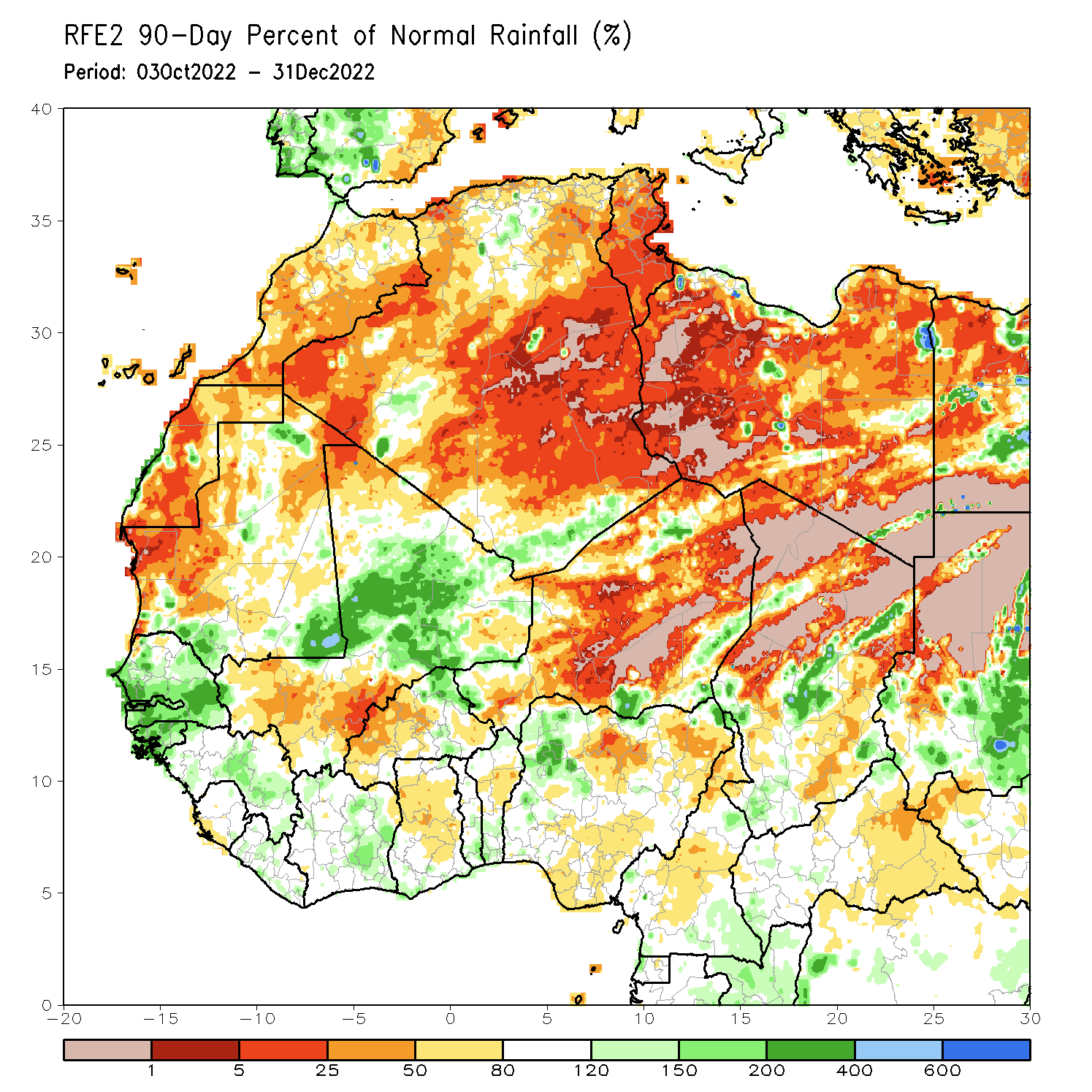 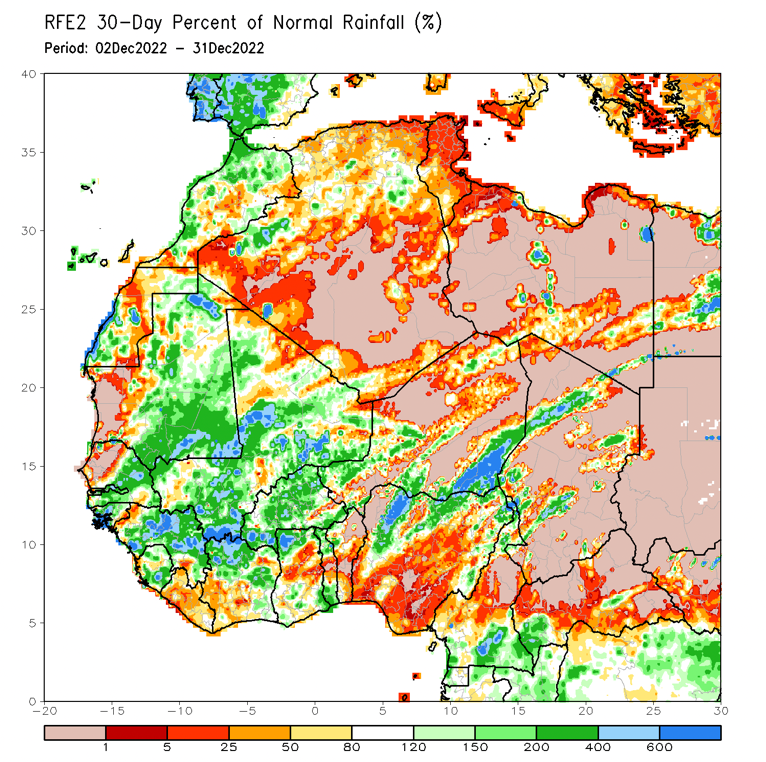